"Sunday was a special day at Two Wells when residents gathered in the Memorial Park to witness the unveiling of the Memorial to Fallen Soldiers of the Port Gawler District. The attendance was very large. The memorial is placed in the centre of the park which fronts the showgrounds and is part of the design prepared for the committee by Mr Reade, the State Town Planer.

The stone is Murray Bridge red freestone and the monument stands 17 feet 6 inches high from the ground. It was prepared and erected by the South Australian Monumental Company and is a splendid piece of work. Rising from a square base, there is the prepared base showing the names of the district men sacrificed in the war.

The memorial is topped by two slender columns that add dignity and appearance to the design.

Grouped around the Memorial were chairs for the aged people, the committee, Members of Parliament and parents who suffered loss being accommodated on a twin trolley. platform.

The Chairman of the committee Mr. T.W. Day presided. He expressed his pleasure at seeing so many people present at what was now becoming a common ceremony throughout the Commonwealth. The Port Gawler movement had its origins two years before when it was decided to lay out a park and crown the work with a monument. When the reserve is completed the committee intend to hand it over to the District Council.

Mrs Weatherspoon (senior) drew the cord that released the Union Jack drapings from around the Monument and the audience stood while the Last Post and Reveille were sounded by Trumpeter Dawes of Gawler.

Mr H.B. Crosby, M.P. gave a stirring address and the service concluded with the hymn "Oh God our help in ages past", the benediction and the National Anthem. 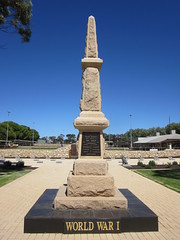 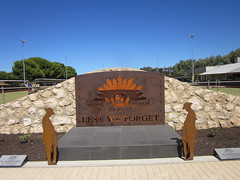 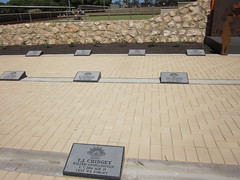 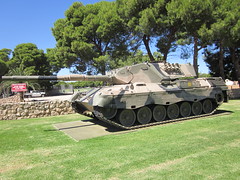 Do you remember Two Wells War Memorial ? Then Join up and add your memory here.

This page was last modified on 16 April 2015, at 13:22.Text on this site is available under the Creative Commons Attributions/Share Alike licence; additional terms may also apply. See our Terms of Use.
About Now and Then | Places | People | Events | Organisations | Things | Contact us