The foundation stone of the Shannon Methodist Chapel was blessed by Mr. Joshua Marshman of Mallala on 8th October 1872.

The South Australian Advertiser August 6. 1873 The opening of the new Primitive Methodist Chapel at Shannon's, Hundred of Dublin, was celebrated on Sunday and Monday, August 3 and 4. The chapel is calculated to accommodate from 120 to 140 persons, is a neat structure, substantially built of stone, and covered with slates, and has six Gothic windows and a porch. Sermons were preached by the Rev. S.J. Nicolls, of North Adelaide, to large congregations, a considerable number being unable to gain admittance. On Monday a still larger company were assembled, and did ample justice to the abundant spread of good things provided by the ladies and bachelors. The public meeting which followed, was presided over by Mr. E. Temby, J.P., and the report read by Mr. J.N.Lindsay. Vigorous speeches were delivered by Mr. Geo.. Marshman and the Revs.J.S.Wayland, A.W.Wellington, and S.J.Nicolls, congratulating the settlers on the erection of a religious sanctuary, and urging them to seek the presence of the great Spirit as an earnest of their future prosperity. The financial appeal was made by Mr. Nicolls, and was heartily responded to, £61/16s/10d being the total proceeds of the two days' services, leaving something less than £150 debt upon the building

Mr. Hartley was elected curator of the cemetery ajacent to the church.

In July 1923 the Jubille of the Shannon Methodist Church was held over several days. and on Sunday July 23rd two services were held with Rev. A.W. Wellington as Preacher.

Due to declining numbers the church was closed in 1957 when Rev. R. C. Dalton was the circuit minister.

The church building was demolished in 1966 and at that time the District Council of Mallala took over the management of the Shannon Cemetery.

A cairn was built on the site of the Shannon Methodist Church and on April 17th 1977 the plaque was unveiled by Mr. Frank Johnson.  Rev. T.C.O. Patrick was invited back for the Memorial Dedication Service.

The sign "SHANNON CEMETERY" was built by the firm Basset Welding & Fabrication, Lewiston and erected in 2005.

On April 11th 2010 a service was held at the Shannon Cemetery to dedicate the newly erected columbarium. During the service Mrs Gwen Secomb was the master of ceremonies and Rev Grant Jewell officiated. 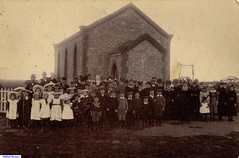 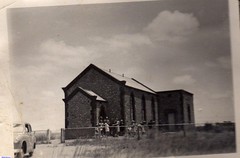 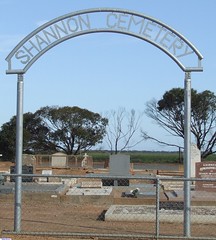 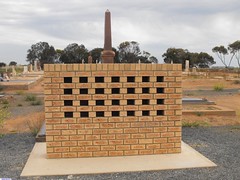 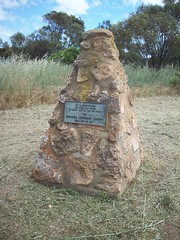 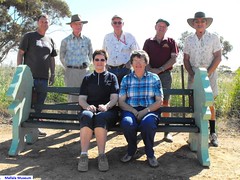 Do you remember Shannon Cemetery ? Then Join up and add your memory here.

This page was last modified on 9 January 2013, at 14:43.Text on this site is available under the Creative Commons Attributions/Share Alike licence; additional terms may also apply. See our Terms of Use.
About Now and Then | Places | People | Events | Organisations | Things | Contact us