Prior to the opening of the Mallala Institute in 1885, public events and functions made use of the Council chambers of the District Council of Grace, which had been constructed in 1878.

Leading up to 1885 it became clear that the pound for pound subsidy that was available to construct Institutes was to be discontinued, and there was some urgency for the community to commit to a new hall, or lose the opportunity for assistance. There were no funds immediately available, and so 20 residents agreed to guarantee an amount of 200 pounds, and this then enabled the securing of a further 200 pound subsidy, delivering a total of 400 pounds to the building fund. On 12 March 1885 the Honourable D. Murray laid the foundation stone for the new Institute. (The silver trowel used for the ceremony was handed back to the Institute committee during the Back to Mallala Centenary celebrations in 1937.) Thomas Griggs was selected as the builder.

The early years of the Institute proved troublesome for the original trustees, and in 1890 the District Council of Grace was approached to consider taking over the building. A vote of ratepayers rejected the idea, however the trustees persisted, and in 1899 the Council paid off the balance of the Bank of Adelaide mortgage, and took ownership of the building. The management of the Institute was vested in a committee, three members of which were appointed by subscribers and two by the District Council.

A glance at the list of hirers shows the variety of uses for the Institute. There have been dentists, hairdressers, and teachers of crafts, gymnasium and dressmaking. There have also been cinemas, church services, conferences, table tennis matches, concerts and choral societies not to mention the balls, bridge and band practice (in 1921 permission was given for band practice subject to noise level).

The library was an integral part of the Institute and in 1902 when Mallala joined the Institutes Association it was aided by a better book and magazine exchange.

In 1983, with the co-operation of the Education Department and the district council, a community library was set up and based at Two Wells primary school with a depot at Mallala school, thus superseding the Institute library. The Mallala branch of the library has now relocated again into the Council offices, and the Two Wells branch into the Institute in Two Wells.

The Mallala Institute continues to be managed by a committee of Council, and is used for a variety of activities and functions in the local community. 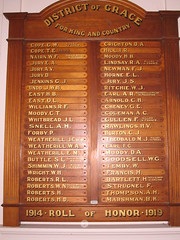 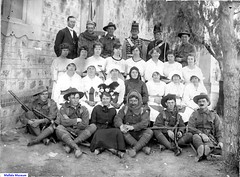 Identifying the people in photographs can be a bit of hit and miss as well as a challenge. I hope the naming of the members solves any queries.

Do you remember Mallala Institute ? Then Join up and add your memory here.

This page was last modified on 9 July 2019, at 19:52.Text on this site is available under the Creative Commons Attributions/Share Alike licence; additional terms may also apply. See our Terms of Use.
About Now and Then | Places | People | Events | Organisations | Things | Contact us