On 28 May 1923, a letter was sent from the District Council of Mallala to the S.A. Fire Brigades Board requesting fire protection for the Mallala area. A letter of acceptance was received on 4 September 1923 recommending Albert Henry Huxtable to be the Auxiliary Foreman and that he be paid a retainer. At first he was equipped with a bell and a handcart with which he ran to the scene of the fire. Townspeople would form a bucket line to fight fires in the township. The only other means of fire defence outside of the township was by means of a wet sack or hastily cut tree boughs.

Albert Henry Huxtable completed 27 years of service with the Mallala brigade and his attendance and duties were recorded until the day before he died. During the early years the employees of East Bros Co. (where Mr Huxtable was an employee) comprised most of the fire fighting team.

In 1939 a state organization named the Emergency Fire Service (E.F.S.) was founded. State and District training schools were introduced and district and rural fire fighting bodies were affiliated.

The first Fire Station at Mallala was an iron shed near the corner of Dublin Road and Railway Terrace. Between 1941 and 1945, the majority of fires were incidents from house chimneys catching on fire, farmers burning off stubble fires, incidents at the Mallala R.A.A.F. training base and fires started by the steam trains along the railway corridors.

Mr A.E. Algar was instrumental in seeking the installation of the first siren (a World War 2 air raid siren) installed by headquarters’ electricians on 16 October 1945 and Mrs Les Jury (a member of the brigade) operated the alarm system as she lived nearby. The siren was tested every day, except Sundays and Christmas Day, until 17 August 1949 after which it was tested every Saturday at 12 noon. Mr A.E. Algar usually did this. This siren was used until 1994.

On 6 October 1945 a Chevrolet Hose Carriage (with 2,497 miles on the speedo) was delivered to Mallala and the old Reo hose carriage was returned by goods train to Adelaide.

Extensions were made to the Fire Station on 19 October 1945 by the District Council of Mallala and completed on 10 November 1945. The station was lengthened to house the Chevrolet and a hose trailer.

In 1957 the fire service moved and commenced operation from the former District Council office on Aerodrome Road. The Ambulance building was next door. When a new Ambulance Station was built in 1975, the fire brigade used the St John Ambulance obsolete building as a meeting and communications room and equipped it with radios, as the Council office and their radio network had been used during callouts up until then.

The brigade also has two trailers. A small trailer is used to transport a cable used for haystack fires and also carries a portable dam. The second trailer is a support trailer, which has tea and coffee facilities, generator, lighting and spare equipment for use when incidents become prolonged and during the night.

In January 1994 the Country Fire Service at Mallala moved to a new building on Railway Terrace with the relocation occurring whilst several members were in the midst of fighting fires in Sydney N.S.W.

A new siren was installed but is now only used for major fires in the district. All crew are now equipped with a pager that alerts them of incidents.

Newspaper story: 27th Jan 1923. "On a Saturday night at the Mallala Institute during a picture show, East Bros Pty Ltd premises caught fire. There was a hasty adjournment of the film and a rush by the patrons to the fire scene where books and papers had to be cleared out. There was no fire reel and it was buckets and tubs that were used to carry water to put out the fire." 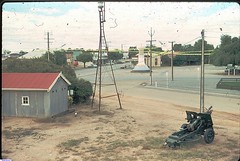 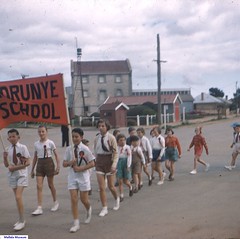 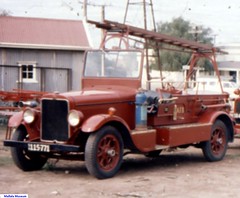 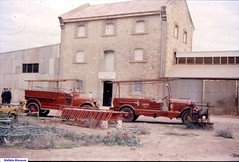 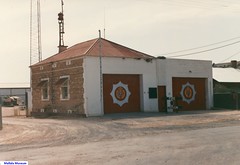 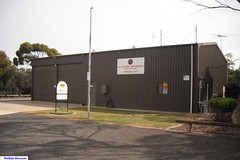 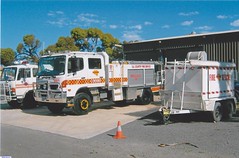 Fire! Fire! First Alert at Avon on January 22nd 1948 Teenager Val Clark worked at the Avon General Store and Post Office and on the fateful day was delivering the bags of outgoing mail to the Avon railway station to be deposited on the midday train from Port Pirie to Adelaide. Val glanced northward and could see smoke on the railway corridor in the direction of Kallora. Val raced back to the shop to tell the owner and he instructed her to get on the switchboard and notify everyone by telephone that the fire was coming. Val was able to pull all the switchboard plugs out at once and let everyone know about the danger. What a valuable service in an emergency.

Do you remember Mallala Country Fire Service ? Then Join up and add your memory here.

This page was last modified on 3 March 2020, at 18:43.Text on this site is available under the Creative Commons Attributions/Share Alike licence; additional terms may also apply. See our Terms of Use.
About Now and Then | Places | People | Events | Organisations | Things | Contact us