Alf Huxtable contributed to the Mallala community in many ways. In the early days of the Mallala Football Club he was a player and an official for a  number of years.

In 1923 he was appointed as an auxiliary fireman for the Fire Brigades Board of S.A., in charge of the Mallala Township unit. He held that position until his death in 1951.
He and his son C.W. ("Cam") Huxtable were in charge of the Township and Rural Fire Services for some 50 years between them.

Alf Huxtable served the Mallala Institute as Secretary, Librarian and Caretaker from 1929 to 1951. He was a foundation member of the newly-established Mallala Bowling Club shortly after World War 2 and served as the greenkeeper. He was made a life member of the Club for his services. He was also a part-time employee with the District Council of Mallala, in charge of the public gardens in the township and the watering of new tree plantings in various streets and the Mallala Oval grounds.

As a former blacksmith, he had a colourful turn of phrase, which he could produce if he thought that someone was not "playing the game" or not contributing enough to the community. He could not understand why anyone would not want to give voluntarily to improve the community facilities. He did not suffer fools gladly.

Alf Huxtable was employed by East Bros & Co. of Mallala for 50 years - 20 years as foreman.

The photograph of Railway Terrace shows the premises of East Bros & Co. was across the Dublin Road from the Fire Station( the small shed in the foreground of the Mill). While at work Alf was able to attend the Fire Station rapidly when  the fire alert was called.

Albert Henry Huxtable (Alf) was appointed the first foreman of the newly established Mallala Fire Brigade Service in a letter to the District Council of Grace dated 4th September 1923. Alf was a volunteer with the Mallala Country Fire Service for 27 years. 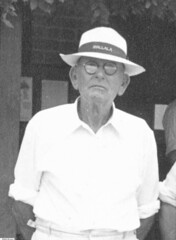 A view of the western section of Mallala with the Weighbridges and Fire Station identified.

Do you remember Huxtable Albert (Alf) H. ? Then Join up and add your memory here.

This page was last modified on 9 July 2019, at 18:57.Text on this site is available under the Creative Commons Attributions/Share Alike licence; additional terms may also apply. See our Terms of Use.
About Now and Then | Places | People | Events | Organisations | Things | Contact us