Research commenced in earnest in the year 2000.

On discovering that there were veterans from Korunye, Lower Light, Windsor, Long Plains and Wild Horse Plains included on the Dublin Honour Roll and that none of these townships had a public memorial, the decision was made to cover the Hundred of Dublin and Korunye as well.

By August 2003 the Dublin History Group had completed all the research which included the local veterans who had served in four wars, but also the names of veterans who were born in the area but moved away when they enlisted.

In early 2001 a design for the memorial by Dublin resident Paul Gristi F.R.S.A.S.S.A. Dip. Art  was forwarded and was accepted by the committee, and in May 2001 it was endorsed by the District Council of Mallala.

David Cook Memorials from Balaklava was the successful tenderer to build, inscribe and erect a memorial made of polished red granite, 1.8 metres in height x 0.5 metres square and to sit on a base of red granite 1 metre sqare.

Following public consultation the Lions Club Park at Dublin was chosen as the site for the memorial. The project was approved by the District Council of Mallala in 2002.

Construction of the monument base commenced in September 2003 using limestone from local properties and the memorial was completed five days prior to the opening ceremony.

All the years of work culminated in the official dedication ceremony on November 9th 2003 when over two hundred visitors returned to Dublin to reminise and enjoy the wonderfull well organized occasion.

A Catafalque party  from the Australian Army personnel  at  the Port Wakefield  Proof and Experimental Establishment mounted guard.

Distinguished guests and guest speakers  included the Honourable Neil Andrews, Speaker of the House of Representatives and Member for Wakefield, and John Mier M.P. Member for Goyder and Opposition Whip.

Mrs Margaret Gameau Chair of the District Council of Mallala read the requiem.

Melanie Virgin of Dublin read the "Ode of Remembrance".

Mr Marcus Strudwicke Deputy Chair of the District Council of Mallala was Master of Ceremonies.

The President of the Dublin History Group Mrs. Pat Thompson thanked the many volunteers who contributed to the project and especially the District Council of Mallala who assisted in many ways.

An additional project of paving a path around the memorial saw the descendants of the early pioneers, other families and businesses with a connection to the Dublin area purchase a paver and have their names inscribed on it.

Three  hundred and eighty pavers were purchased and inscribed and laid by volunteers from Dublin namely Peter Fitzpatrick, Allan Terrison and Michael Ronstad. The council gardeners had the area in immaculate condition and all the yellow roses were flowering.

The Memorial and Paving project was jointly funded by:

The Flag Pole was financed by the Dublin Hotel. 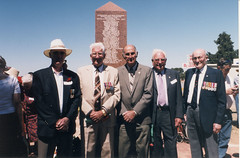 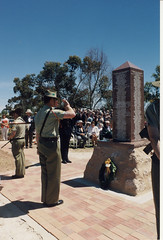 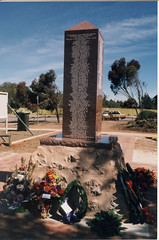 Do you remember Dublin Pioneer and War Veterans Memorial ? Then Join up and add your memory here.

This page was last modified on 18 July 2012, at 14:38.Text on this site is available under the Creative Commons Attributions/Share Alike licence; additional terms may also apply. See our Terms of Use.
About Now and Then | Places | People | Events | Organisations | Things | Contact us