On 20th September 1967 twenty one members were present for the first practice evening.

In 1979 the S.A. Government altered the name to Country Fire Service'

On 4th August 1986 the C.F.S. Station on the corner of First and Sixth Street Dublin was opened by Mr Donald Mac Arthur. The land had been donated by Mr. Milton Schlodder to the D.C. of Mallala.

The C.F.S. members funded an extension to the building to accommodate the crew as well as the radio, toilets and radio tower.

Training was limited to advice from members of Two Wells and Mallala Brigades, and any other training obtained on the job. Mallala District Council had special people appointed as Fire Control Officers, mainly Councillors and employed staff. The Emergency Fire Service was council funded with a small grant from state government.

Most of the work of building the shed was done by a few dedicated volunteers and obtaining equipment that was surplus and “hand me down” from the other brigades.

But we had a start and the new brigade nominated Mr. Ray George as the Officer in Charge. Mr Philip Ferme was also past Brigade captain, Mr. Terence Halford Past Brigade Captain. The three framed certificates that are displayed are for the only ones that were able to attend a Fire Control course at the Police Headquarters and Barracks, Port Road, Thebarton. These courses were held once a year. The training was over four days and consisted of a series of lectures and practical work. E.g., MFS fire hose and pump drill, also fire extinguishers training. I remember we were driven out to Parafield air port where there was a big bonfire and dishes of burning oil to put out, it wouldn’t be allowed today. A Sergeant from the Army lectured on Map Reading , and St John Ambulance personnel taught First Aid. We had a Sergeant Major of the British Grenadier Guards teaching us how to march. This was the only official training we had.

Khaki King G overalls and a white site helmet were supplied from a very small budget by council. If the brigade was needed the phone call was “OOO” and the local manned switch board operator had a list of phone numbers to call, with the first phone at the shed switching the siren on. Most times nobody put their overalls on - they said it took too long to get into them. Any one could get on to the fire truck, piling out of the pub, with a beer in their hand, all keen to get to the fire.

It all changed when the Country Fire Service sent out a letter stating that if you were injured and you had no helmet or overall on you may not be covered by insurance. We were only called out to fires in the first years. The highway didn’t have much traffic except on long weekends. The roads to the north to Darwin and to WA were still unsealed. The only trucks we saw were Brambles red V8 petrol Internationals or Dodges and Greyhound coaches. The Port Wakefield highway went through the town on Dublin and as it continued on was narrow and winding.

The Fire Shed was originally in front of the Institute then it moved to the front of the pub until the new highway was built. As the roads to the north were sealed the traffic increased, and as there was no speed limit the accidents were really bad. At one time we had a death a month or more.

In about 1966/67 the Dublin community ask their councillor Mr. Roy Bache if they could have the old Chevy fire truck from the Mallala Emergency Fire Service Brigade. It was very basic and fitted with an oval 500 gallon tank with a hand pump, and canvas 30 foot of two and a half inch hose. Mr Milton Schlodder had a block of land in the middle of Dublin where he had sheep yards and a shearing shed. He gave a small block of the land on the east side on which to put a double garage to be the fire station. The members laid the base and put up the shed - this is documented in the Brigade minutes of the time.

It became obvious that a better fire truck was needed so Council agreed that a International C1500 ACCO tipper truck that was surplus to council needs would be available. It only had 200000 miles on the Speedo. It had a six cylinder petrol motor. Fully laden it would only hold three people - the driver, the passenger and one sitting on the engine cover and as many as we could stand on the back around the square 500 gallon water tank. We had three 30 ft canvas hoses and a hose reel 30 ft of rubber hose.

The Two wells brigade had an Austin Gipsy 4 wheel drive - a bit like a Land Rover that Mr. Hart of Two Wells had driven across the world from England to Australia. They had made it in to a small fire unit. Mallala Council had supplied them with a new truck and as it was not needed we had it as an extra unit. This was very popular with the boys in the brigade driving down the sand hills near the beaches.

As the number of road crashes increased we were being called by the St. John Ambulance to help but we had no equipment to get victims out of the cars. Phil Ferme, Robert “Gus” Sanders and Terry Halford purchased some Enerpac hydraulic equipment that crash repair garages use to repair damaged cars, plus a small hydraulic jack, jemmy bars, lump hammer, bars and a metal saw in a steel box that we had made. This was stored in a cupboard in side of the truck – it took two men to lift it out. We could now help get injured crash victims out. One time we were called out to a vehicle accident north of Dublin. We arrived and started to help the people then we got a call on radio asking us when we were going to get to the accident. It became clear that there was another accident further up the road which was the one we had been called to.

Because of the increased number of calls we needed a better road crash unit. We asked council to fund another fire unit. We went to the auctions and found a 4WD truck -an ex ETSA International C1610 with a V8 Petrol and a huge gear box driven winch on the front bull bar cab chassis - this was purchased. The Jones brothers from Lower Light built a new back on the truck. It carried 2000 litres of water and the rescue gear with plenty of cupboard space. The shed had an extension built on the back in order to house all three trucks.

We had a problem. It became obvious that a new shed was needed. If one of the trucks in the front of the shed was unable to start it was impossible to get the others out. Also, the main road was becoming busier and for members to be able to get out of the shed on a busy weekend was extremely difficult. I enquired the prices of a new shed and a company called Badge Construction at Clare was the best quote for a 4 bay shed with 12 feet spacing 50feet by 30feet and 14 feet high to the gutters. I was told it was too high to which I asked if they had seen the new fire unit at Virginia because that will be the size of the new generation of trucks. Again, Mr Milton Schlodder, who was a Life member of the brigade, said that we could build on the south west corner of his land. The whole block was surveyed into blocks and a deal was done with Mallala District Council.

The new shed was built with the crew room and toilets added by the brigade members over a period of time at no cost to council. The large granite stone at the front was donated by Silky Pratt from Owen and Trent Baker and I went to Owen in his International Tipper to collect it. When we got to the station we had an idea were it should be put so Trent slowly tipped it off. The rock didn’t move then it dropped and that’s where it stayed and we put concrete slab around it. We had a great opening with the Chief Officer of CFS Mr Donald MacArthur and other dignitaries attending. We had many fund raising efforts to get enough money to buy the jaws of life. We were the first country brigade to have this advanced equipment

The Austin Gipsy was taken off us by the Mallala Council who said it was to be used at the Mallala dump as a fire unit but it was lost - it should have been restored. A new Hino was purchased. The Brigade is a dedicated Road Crash Rescue Unit.

I enjoyed my years in the CFS and we had competitions all over the state at which Annette and I were Judges. We had all weekend exercises. We attended many large fires around S.A. and task forces to N.S.W. and Victoria plus B A training, and Road Crash rescue training. I was a branch President of the Volunteer Fire Brigade Association and on the Country Fire Service advisory board.

This is an abbreviated record as I remember the Dublin and Districts CFS. Written by Terry Halford, Life member and Brigade Captain for approximately 18 Years .'

In April 2020 a new multi purpose extension is being built onto the Dublin Brigade Fire Station. 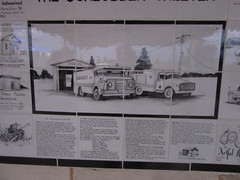 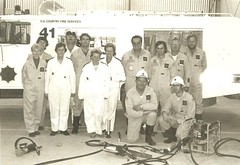 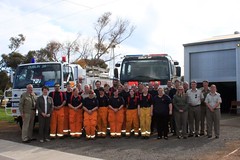 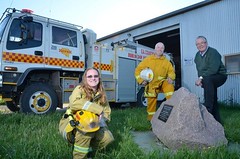 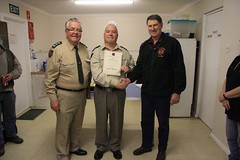 Do you remember Dublin Emergency Fire Service ? Then Join up and add your memory here.

This page was last modified on 25 May 2020, at 11:33.Text on this site is available under the Creative Commons Attributions/Share Alike licence; additional terms may also apply. See our Terms of Use.
About Now and Then | Places | People | Events | Organisations | Things | Contact us