Merle Baxendale was born in Adelaide on 4 Jan 1924 and was living in Renmark SA, in June 1941, when she put her age up and applied to join the RAAF. Her application was deferred and one year later, on 4 January 1942, the day of her eighteenth birthday, she again applied to enlist and was accepted into the Women’s Auxiliary Australian Airforce (WAAAF).

Basic training was at the WAAAF Training Depot, at the Geelong Grammar School, in Preston Victoria, after which she was classified as a Messwoman. An aptitude test revealed she had a strong technical ability and in February 1943, she successfully undertook a Fitter’s course at No 1 Engineering School, which had been set up at the Melbourne Showgrounds at Ascot Vale. She completed that course on 5 May and on 31 May she became one of only 2 females from SA to commence an electrical course at No 3 School of Technical Training in Sydney. Merle graduated on 17 September 1943 and was reclassified as an Aircraft Electrician.

On 12 October 1943 she was posted to the 6 Service Flight Training School, situated north of the town of Mallala, in South Australia. There were about 170 WAAAFs on the base, engaged in a range of administration and aircraft maintenance duties that had previously been the sole province of males, including fitters, flight mechanics, machinists and electricians.

Merle was one of two aircraft electricians assigned to the station, where she worked on a range of twin engine aircraft including Airspeed Oxfords, Avro Ansons, Tiger Moths and a lone, single engine, Gypsy Moth, which was used as a base communications aircraft. As the only girl in the electrical unit, she was teased by the men and was often the subject of practical jokes. One of the highpoints of her job was being able to go for a ‘joy flight’; when maintenance personnel had finished a 240 hour inspection on a plane, they were allowed to go on a test flight, to guarantee that their work had been done properly.

Base personnel were accommodated in wood and corrugated iron huts and Merle and a number of other WAAAFs were housed in Hut 122. It was unlined and temperatures could sink to freezing in winter and rise to over 100 degrees Fahrenheit in summer. Dust storms were also common, covering aircraft and people in a layer of dust. The WAAAFs tried to make life cheerier by decorating the huts with small gardens edged with white stones.

On 15 August 1945, the surrender of Japan was announced and all personnel were stood down for two days. The airfield continued to operate into September, when the unit began to wind down and personnel were posted out. Merle was ‘demobbed’, or discharged, on 1 January 1946.

Merle later married and in 2004, as Merle Allen, she visited the Mallala Museum and donated some photos and memorabilia from her time at the base. Merle passed away on 9 April 2019, at the age of 95. 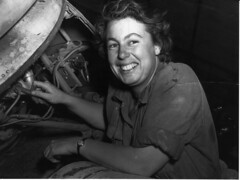 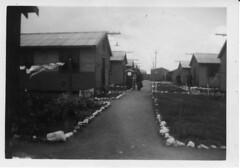 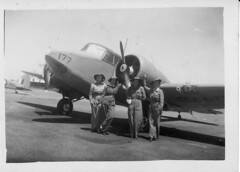 Do you remember Baxendale Merle 91690 ? Then Join up and add your memory here.

This page was last modified on 8 October 2020, at 16:05.Text on this site is available under the Creative Commons Attributions/Share Alike licence; additional terms may also apply. See our Terms of Use.
About Now and Then | Places | People | Events | Organisations | Things | Contact us